Isobel Kuhn: On the Roof of the World (Free Printable Unit Study!)

Have you ever wondered what God’s plan could possibly be in a certain situation? Isobel Kuhn wondered that. She went through a period when she wasn’t sure there even was a God. She experienced heartbreak and despair when her marriage plans fell apart and she didn’t know what to do. In time, she put her trust in God and learned that He did indeed have a plan for her life. Still, there were times His plan was not always clear. She knew He was calling her to be a missionary, but she didn’t have the funds to go for training. When He provided the funds, she got the education she needed and made plans to go to China, only to not be allowed to go due to unrest in the country. She worked in Vancouver until the doors to China opened. She and her husband served the Lisu people in China for many years until Mao Zedong and the Communist Party took control of the nation. Next they served the Lisu people in Thailand until a cancer diagnosis changed their plans once again.

The story of Isobel Kuhn (or Belle as she was often called) is one of the first Christian Heroes Then and Now books that I ever read by Janet and Geoff Benge and YWAM Publishing. Every time I consider the story, I’m reminded, as Isobel discovered, that no matter what plans man makes, God’s plans are the ones that triumph in the end. There are countless ways you can go deeper with Isobel’s story and use it to study almost any subject.

The exotic setting of China gives many ways to bring science to life.

Belle prayed for God to make Himself known to her by giving her peace. Memorize John 14:27 as you work on the copywork in your free printable pack and think about the peace Jesus gives those who love Him.

When Belle first arrived in the land of the Lisu, she did not know any of their language. Learning a new language and translating the Bible into another language are challenges missionaries face all of the time. Think of at least ten words you use that would not make sense to someone living in a village on the other side of the world. Create ways to explain to that person what those words mean. For example, how would you explain what a car is to someone who has never seen one before? Remember that they may not have electricity, computers, microwaves, or even a grocery store.

The first step of Belle’s journey to the Lisu people was to move from Shanghai to Kunming, the capital of Yunnan Province. Locate the two cities on a map. What is the distance between them?

China is a HUGE country! But just how big is it? Use your math and map skills to answer the following questions: Belle and her husband spent years explaining to the Lisu people who Jesus is. We know that Jesus is the Light of the world. Make a Chinese lantern today and hang it where it will remind you to pray for the Lisu people and all the people of China.

Belle found much of the food that the rural people in China ate difficult to stomach, including boiled pig fat and bean curd with rice. She later discovered the markets also sold tomatoes, potatoes, carrots, onions, and cabbage. Do some culinary research and see what recipes you can make that use mostly the ingredients listed above (you may skip the boiled pig fat and bean curd if you prefer!).

The land of China is rich in history. There are many ways you can learn more about the nation and its people.

*Your download will be delivered via email once you subscribe. You will not be added to the list twice if you are already a subscriber  If you don’t see it in your inbox within an hour, check the spam/junk folder. For gmail accounts, also check the Promotions folder. If the email hasn’t arrived after an hour, feel free to email me and we will troubleshoot together!

For a limited time, you can also download a free sixteen-week study of Asia: Its People and History. 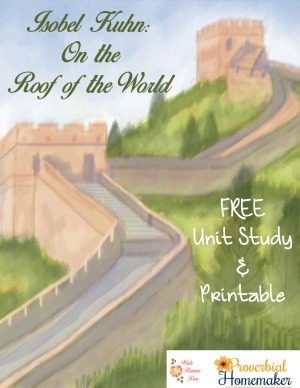 Your download link will be emailed to you and you will be subscribed to Proverbial Homemaker if you aren’t already. Be sure to check your spam/promotions folder. If you have any issues, check out this troubleshooting guide or feel free to email me!

Awesome! Keep an eye on your inbox for an email with the download link. Hope you love it!

Bonnie Rose Hudson works as the Executive Editor of SchoolhouseTeachers.com, the curriculum site of The Old Schoolhouse Magazine®. Her heart’s desire is for every child to feel the love of God and know how special they are to Him. She would love for you to stop by her author’s blog WriteBonnieRose.com for resources to help teach your children about missions and the persecuted Church, free history and writing printables, and to discover how you can write for the homeschool market. You can also find her on Facebook, Pinterest, and Twitter.